Asher thought it best to make the way to his Haunt arduous, the path dangerous, and the distance formidable, so that those who actually arrive are those who are capable of withstanding certain rigours.

The Haunt is a setting and feature of a series of stories by Asher Black featuring a pseudonymic namesake character - Black Asher - and several friends. The Haunt is Asher's home, and it also houses apartments used occasionally by his close friends when staying over to visit or work. The Haunt is what Asher calls a "construct", a virtual space in the mind, the architecture of which corresponds to and summarizes a particular way of thinking. Asher sometimes refers to the Haunt as "The Place of Nakedness", though it has nothing to do with nudity. The following are some background pieces on the Haunt: 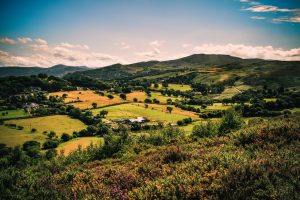 Asher's Haunt is accessible from his Office, from the Arena, or through Asher - himself. Like all large houses, it is full of doors, and doors, once opened, have a way of changing things on both sides even if they are shut again immediately. Some doors are already open, some closed, and some even locked. Others only open to those who know how to speak to them.

There are also doors that seem to decide what to do quite by themselves, even disappearing altogether if offended or threatened in some way. But it's not wise to offend a door, as word gets around, and one doesn't want a bad reputation among doors in general. Doors have notoriously long memories and are given to fickle and uncooperative temperament when previously prejudiced against a visitor.

It is often thought that the dogs at the Haunt are guarding the Haunt or Asher. In fact, the dogs serve mainly to keep away things that would be much better off not meeting Asher or venturing into the Haunt in the first place. Guests are advised to read the Bestiary of the Haunt, available in the Library, as a first step in getting to know some of the residents and their associates. The Haunt's human residents will no doubt introduce themselves in the meeting hall should you stay the night. 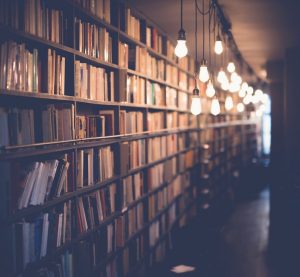 The Haunt library houses, Asher thinks, roughly 8,000 books, though they have a tendency to produce offspring which requires the occasional installation of additional shelves. Asher isn't sure of the exact number of books. When asked why, Asher has replied that books don't like to be counted; they are more modest than we in matters of reproduction and extinction. The library also contains considerable sundries, a number of guest pipes, a leather sofa, a comfortable chair, and a long table (for getting out the 'sources', as an acquaintance likes to put it). Most of the paper files have been converted to digital media. All that remains of the originals are a few filing cabinets and "the pile"—a stubborn lot of pamphlets and oversized journals which have refused to be photographed. The pile moves about the library seemingly on its own. Rather than subjugating it by force, and despite eying it (and being eyed) rather uneasily now and then, Asher has been content to let this resident of the library lead an untroubled nomadic existence.

The library, though modest in size, contains some rare, if specialized, books, a fair number of suppressed books which hide themselves wherever they can, substituting banal volumes in their place, a shelf of classics, another of occult treatises, one of conspiratorial analyses, a rack of patristic and liturgical tomes, a bookended selection of cultural criticism, a shelf which is a mixture of theological hogwash and critiques of the same, a horizontally filled shelf of German military history, a bowing shelf of world historical analyses, a crowded shelf of metaphysical subdisciplines including works of dialectics, politics, physics, and economics, a regal shelf of Encyclopediae Brittanica, Fortean catalogues, and other reference works, some apparently self-dusted shelves of fairy and folk tales, a multimedia shelf, one of journals, rags, and 'zines, and another of diaries, jottings, albums, and other unpublished materials. There are also one or two 'lost' shelves containing books that seem to function as doors -- though, when so accused, they are notoriously mute on the subject. Lastly, there is a workstation with access to the internet, Fidonet, an intranet, and one or two other networks that have been defunct for some time. Among the books in the Haunt library are An Herbiary of the Haunt, The Dossier of Black Asher (routinely out on loan), and the following: 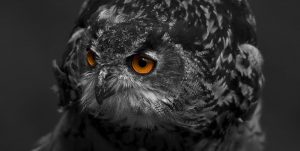 Bestiary of the Haunt

There are two Alsatians that live at Asher's Haunt full time. They tend to serve duty as the indoor guard, and enjoy the glow of the fireplace that warms the meeting room. They are occasionally seen about on the moors by day, but are always at home during the night. Both canines are male. Atlas is sable with a blue streak on his chest. Prometheus is slightly larger and sable, with a small splotch of red behind one ear. The Alsatians are guardians to Asher's guests and tend to prowl the corridors at night sniffing and checking the rooms, before taking up positions in front of the main and back doors until morning. Both animals are of the shorter-haired variety, from the same litter, and were selected not for show but because they seemed the most alert of their siblings.

This particular cat looks like a mix between a Maine coon cat and an Abyssinian. He answers to nothing and no one, but has deigned to frequent parts of the haunt, condescending to sleep in a particular chair most afternoons. He comes and goes at will and hunts for his own food, but has been made to understand that humans don't want his gifts of the best parts of his kills, so he no longer brings them inside. He doesn't comprehend this quirk in humans but accepts it. He is untroubled by the dogs, eyeing them coolly when he passes them in the halls. For their part, they seem to understand that it would be best to leave him alone. Although he will never, of course, come when called, he has at one time been given the name Seneca.

The two male Dobermans serve as an outdoor guard to the Haunt and bodyguards to Asher and so are occasionally seen stalking the surrounding moors at night. They accompany him habitually on his walks, generally double file a little ways in front of him. They are amiable with the Alsatians but rather business like in their fierce role as personal protectors accustomed to the outdoors and the night. Their names are Vorbeck and Rommel. They are keen, quick, have no trace of fear - not of the devil himself - and are extremely loyal to Asher. Once Vorbeck was wounded on one of Asher's late night walks - Asher will not say from what - and Asher cared for the animal in his own bed for a week. The housekeeper on her weekly visit overheard Asher saying, "Sorry brave friend. I would have taken the wound for you if I could." The two animals are from the same litter and solid black, selected for that symbolic reason among others. The are quite tall, and their ears are long and somewhat forward pointing.

Rarely, a shadow has been half-noticed in the trees behind the Haunt, only for a moment, and visitors have occasionally reported feeling as though they were not quite alone when approaching the Haunt at night. The lack of uninvited guests is perhaps partly owing to this sense that something besides the Dobermans is afoot there. At certain times of the month Asher has been noticed putting a bowl of milk and a sack on the gnarly stump of a long withered tree back of the Haunt. Guests have only raised an eyebrow on occasion when Asher, sitting deep in his thoughts, has suddenly uttered "the gruggy" and then, aware of his audience, quickly addressed some familiar topic. The general feeling is that the reference might be related. The Dobermans, if they are aware of the phenomenon, take no notice of any such presence in the night, which is quite unusual indeed.

The merlin is a small falcon. This one is male, and hence slate blue with a dark terminal band on the tail. He is often seen hunting on the moors around the Haunt. Less often, he can be seen sitting on a particular window ledge. Even less often, he can be seen, if the window has been left open, standing on the back of a chair in the same room. Since this is rather far South of his natural habitat, there is no telling how he got here.

The Haunt also features a hearth room and a chapel. Individual apartment descriptions are currently private.

The Editrix explores everything Asher writes and says, endlessly, mercilessly, and gently. She is the practical voice of editorial debate with Asher. She sometimes gives Asher assignments which are really experiments in avenues for creative work – Asher is good with assignments – and then discusses the results of those experiments with Asher. No one knows what the Editrix looks like, so Asher has assigned her the image of Jack Nicholson in The Shining. His punishment has yet to be determined.

The essential thing about The Editrix, is that she senses the unspoken needs of a storyteller in her care, packages them up, and delivers them proactively, whenever possible. Asher has come to rely on her to know what to do when no one else does. She’s a Confessor of sorts. The Editrix also keeps The Book of Asher, which exists only in her private collection, and uses it to remind him who he is, asks him why (about everything), and then studiously records the results of pointed interviews. The book ever grows.