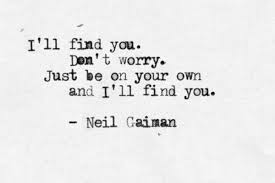 Two books have given me a glimpse of my own childhood through another author’s eyes. The Moonlit Mind by Dean Koontz especially (his book Odd Thomas also has some elements), and The Graveyard Book by Neil Gaiman (Coraline has some elements too). I’ve felt aspects of it in Hearts in Atlantis (Stephen King) also, but Moonlit Mind was the closest to home. The pervading sense of personality and violence, of being a child and someone trying to kill you. It’s so helpful that these men are willing to write about childhood and violence in the way they do – with such candor – not to shock, but to tell. Someone should tell. Someone must. It gives me hope that one day I’ll be able to write it, or at least tell someone all of it, the parts I never tell, the parts I don’t know how to tell. It’s a flood. Who could want it?